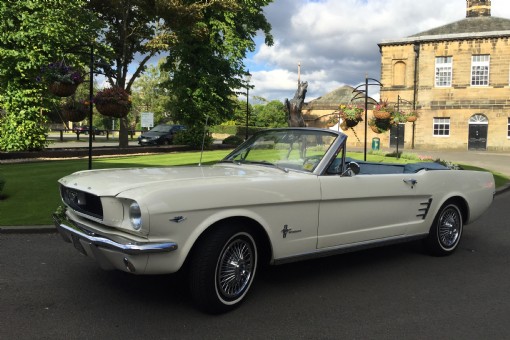 In Wimbledon white with light blue interior and a black hood this 4-5 seater convertible Mustang is in its original 1966 specification throughout. The Mustang was introduced in April 1964 just 2 months after the Beatles first arrived in the States, and made in this body style until the end of 1966, by which time they had sold 1,288,557 Mustangs, still a record number of sales for a new model!
Fitted with a correct, rebuilt 289ci, 4.7 litre V8 engine and easy to use automatic transmission, this Mustang was kept by its last owners in North Carolina in the US for over nineteen years during which time they used it for high days and holidays and for touring. It comes with a power roof which was renewed a few years ago, a hood tonneau, and original radio cassette player.The bodywork was superbly restored in the States which was finished in the car's original Wimbledon white. The power hood works perfectly at the push of a button! The front and rear windows wind down giving a very open feel to the car if required, ideal for superb wedding photos. Mustangs were the first of the "muscle cars", but in reality are more of a cruiser than a sports car.